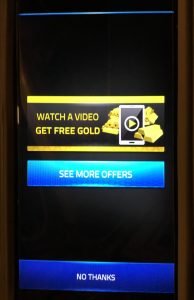 Video of the same ad played 17 times. Click to watch it now.

Ever been in an app in which you get bonuses, more turns or something else in exchange for watching a video ad? I was using a sports game app. In this app you can watch ads to get “gold”. Gold is used in the game. So, when given the opportunity, I will watch a video ad to get gold. How easy is that? However, the advertiser, and maybe even that app’s owners, probably do not realize that they sometimes serve up the same ad. In this case, 17 times (Don’t believe me? Watch the video of it here.) This is obviously a problem – a marketer is paying for exposure of their ad to an audience, but not two, let alone 17 times in a row. (If you make it through the 17 ads, there is actually a different advertiser’s video which gets served up twice in a row.)

Programmatic advertising is the use of technology to help make decisions about to whom, how, where and when your ads will appear. The technology is necessary because it is literally impossible to know all the digital spaces in which your ad would best appear: on desktops, mobile browsers, in apps, etc. No one can possibly know where to place their ads anymore. The analogy would be that old stat that some time in the late 19th century was the last time any one person could “know” all the world’s knowledge. At that point, the amount of things known exceeded the human ability to learn and remember knowledge… there was just too much and it was growing too quickly to keep up. (Ending the ability of anyone to be a “know it all”.)
So it is with advertising once the internet came along. There was a time when a good marketer could “know” all the places that a brand or product should be advertised. Not any more. Between cable TV, digital radio, in app ads, mobile devices, multiple digital ad networks, social media, and so on, it is literally impossible to manually place ads.
Enter programmatic, which uses data to target the right placements for your audience. It uses data on the target audience (you define) and the context of placements (profile of the digital media user, content of the page, site or app, etc.) to place the right message, in the right place, to the right audience.
There are different ways to pay for this advertising. Basically: by click (think Google text ads); or impression (think number of times an ad is served up on a particular site). Sometimes, like with Facebook ads, you can choose whether you pay by click or impression. I’ll write about some reasons to choose one or the other in a future article.

Nobody’s Perfect: Even an Algorithm

Still, no system is perfect. An example: site retargeting ads, which are those creepy ads that “follow” you after you visit a site, are built on the premise that if you visit a particular site you want to see ads from that site/brand/store. Not always true. Last year my wife sent me a link to a dress she and my daughter were considering buying. For the next month I was treated to dress ads on news sites, sports sites… pretty much any site I visited. (You can get rid of these by removing the cookie from the site that is serving up the ads. Here’s a link to a website that tells you how to stop retargeting ads (note, this site serves up retargeted ads 🙂 http://www.techinsider.io/how-to-stop-ads-from-following-you-around-the-internet-2015-12

And here’s how Google suggests you stop such ads: https://support.google.com/ads/answer/2662922?hl=en
Those dress ads were wasted on me… That’s one example of how programmatic advertising can be a waste for the advertiser and annoying to the viewer.

Why You Want to Audit What the Machines are Doing

No matter what service you use, a third party platform, or even running your own digital ads through Google, Facebook and other networks, you get all the reporting data you ever wanted. Be sure to dig into this data. Ask for data on specific sites and profiles of audiences who were served the ad. While even programmatic isn’t perfect, your provider should be able to show that your ad did appear in front of the right audience.
I always say that “all marketing is a test”. There is no better example than programmatic. Be sure you are grading the test, checking the results in detail and getting the end result you desire… that’s usually ultimately sales, but can also include increased digital interaction, leads in the pipeline or even brand awareness. Even machines need accountability.